In 1765, the British Parliament passed the Stamp Act to raise revenue after the Seven Years’ War, which imposed taxes on American colonists without the approval of their elected representatives.

Given the intrusive nature of this particular act (it managed to alienate just about all sectors and led to them working together in organized ways when they might not have done so otherwise), some colonists responded with violence, including the tarring and feathering of British tax collectors. Others mainly expressed their sentiments in newspapers, while a few created satirical (sarcastic or ironic wit meant to expose and criticize others) illustrations. Highly unpopular on multiple fronts, the Stamp Act was repealed the following year.

Use the magnifier to take a close look at the article and answer the questions below.

Read the highlighted section of the article. See the transcription if you are having trouble making out some of the words (e.g., the letter “s” was often written with the letter “f”—so "Stampman" appears as “Ftampman”). 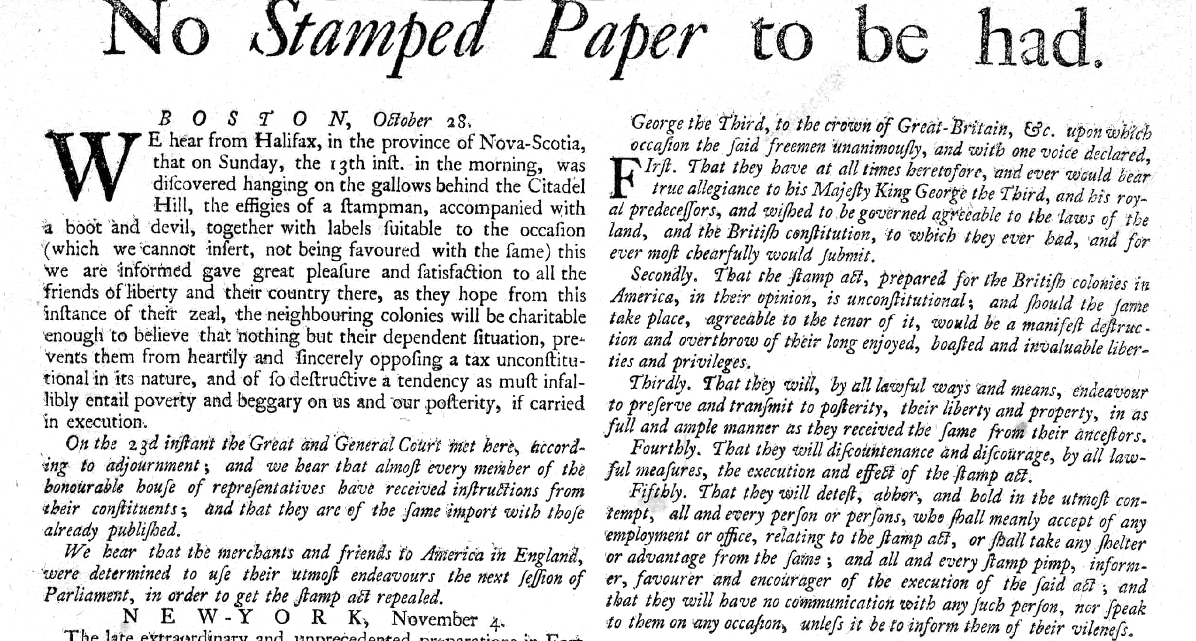 “No Stamped Paper to be had,” Nov. 7, 1765, the Pennsylvania Gazette, printed in Philadelphia by David Hall and Benjamin Franklin. Library of Congress

No Stamped Paper to be had.

WE hear from Halifax, in the province of Nova-Scotia, that on Sunday, the 13th inst. in the morning, was discovered hanging on the gallows behind the Citadel Hill, the effigies of a stampman, accompanied with a boot and devil, together with labels suitable to the occasion (which we cannot insert, not being favoured with the same) this we are informed gave great pleasure and satisfaction to all the friends of liberty and their country there, as they hope from this instance of their zeal, the neighbouring colonies will be charitable enough to believe that nothing but their dependent situation, prevents them from heartily and sincerely opposing a tax unconstitutional in its nature, and of so destructive a tendency as must infallibly entail poverty and beggary on us and our posterity, if carried in execution.

On the 23d instant the Great and General Court met here, according to adjournment; and we hear that almost every member of the honourable house of representatives have received instructions from their constituents; and that they are of the same import with those already published.

We hear that the merchants and friends to America in England, were determined to use their utmost endeavours the next session of Parliament, in order to get the stamp act repealed.

Directions: Examine the illustration of “The Repeal,” utilizing the magnifier to help you. Then use the annotation tool to take notes on the following questions:

Source: “The repeal, or the funeral of Miss Ame=Stamp.” Print shows a popular satire commenting on the repeal of the Stamp Act. c. 1766 Library of Congress

Use the toggle button above to switch to Magnify Mode. Magnify mode will help you see finer detail in the image.
Switch back to Annotate Mode to create your annotations with click and drag. 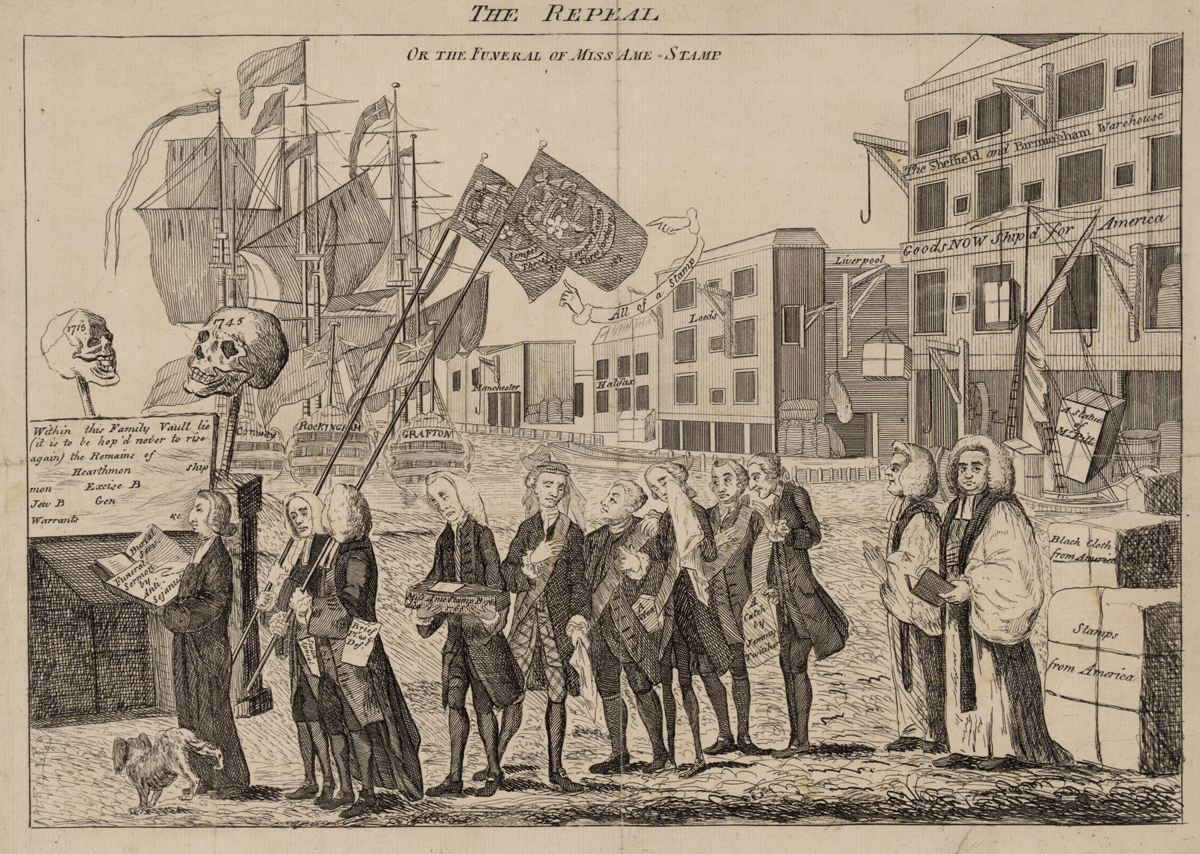 Directions: Take a look at the different sections of the illustration one by one and answer the question that accompanies each section. At the end, you will see the completed image. 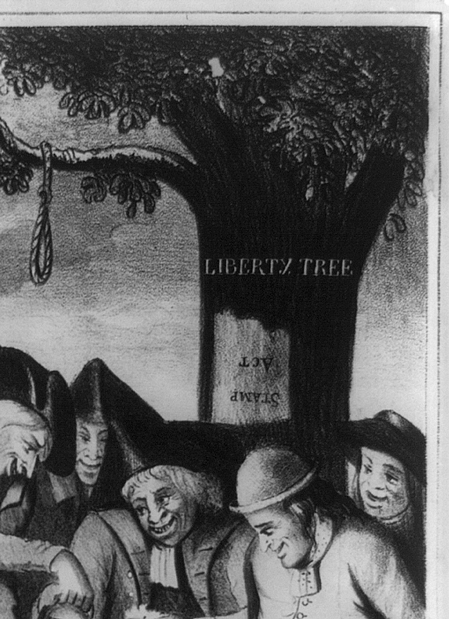 How does the artist use caricature (a picture of a person in which certain characteristics are exaggerated for dramatic effect) to make his point? 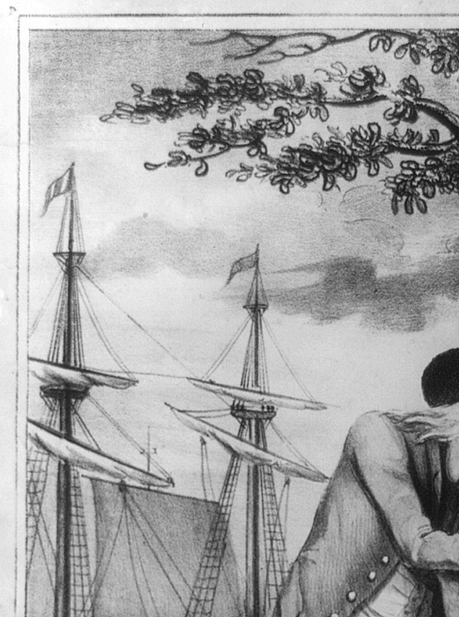 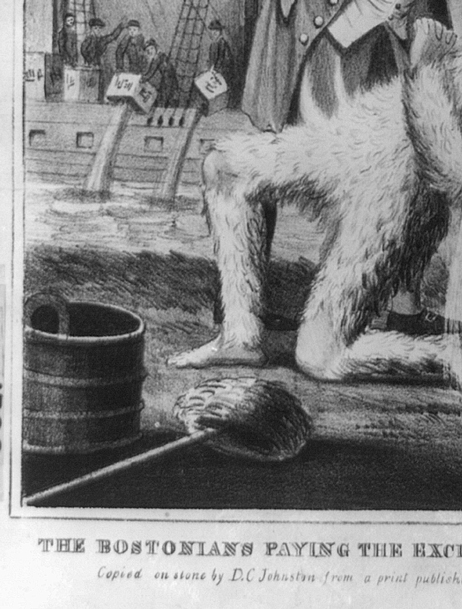 What do you think the cartoon is about at this point? 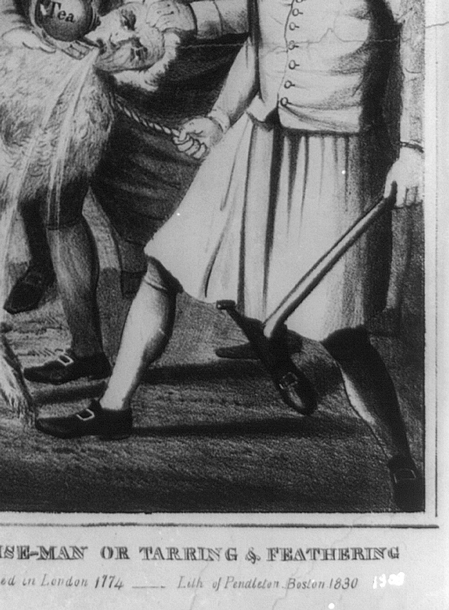 Tarring and feathering a person was a rare but gruesome practice. Why might newspaper publishers want the public to see this image? 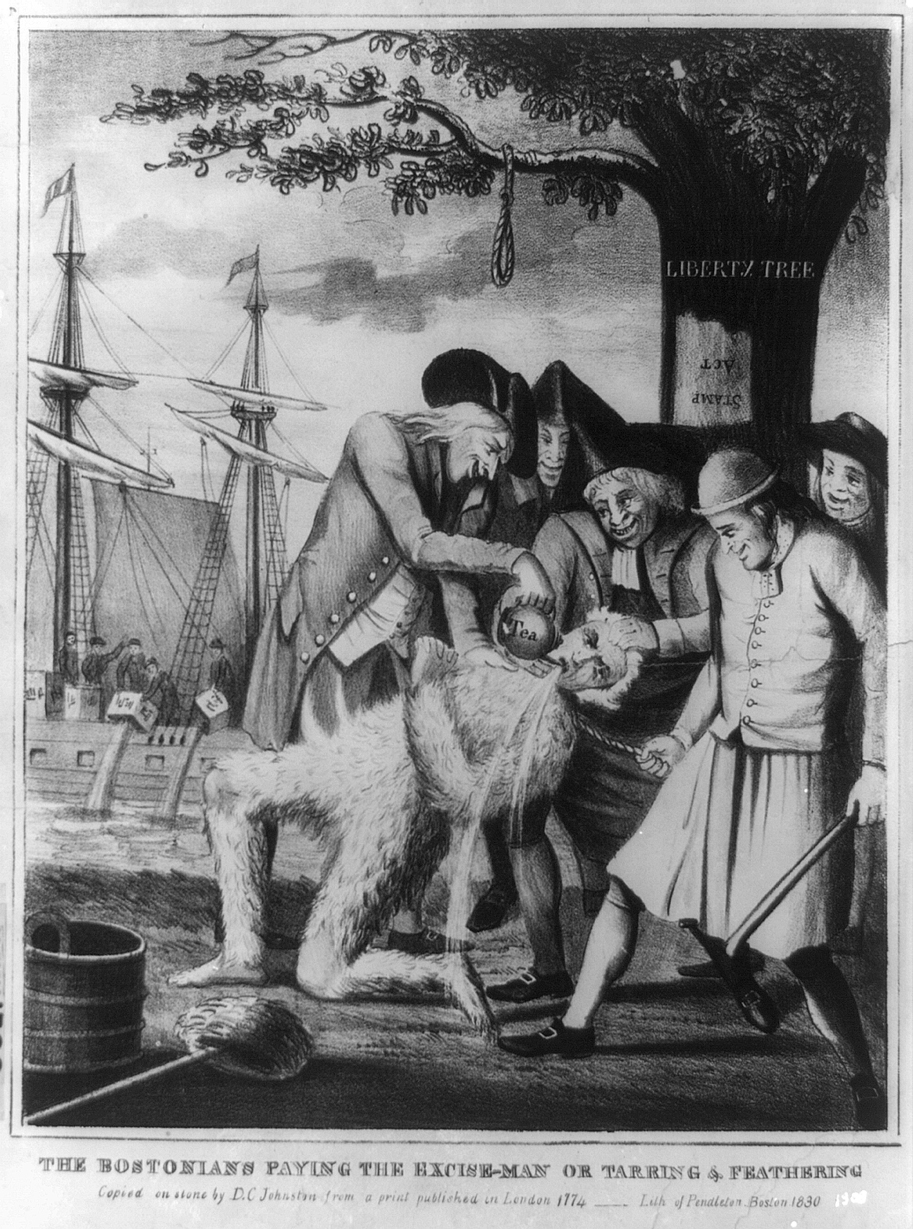